This is the third post in the series The Four Stages of IoT: A Data-Centric Taxonomy of the IoT

Previously, we discussed the connectivity stage, which explored how devices establish a connection with edge devices or the ecosystem backend. Today, we will go one layer deeper and focus on what we do with the data after establishing a reliable connection. I refer to this as the Data Processing Stage.

Data processing can happen in the back end or at the edge, and it involves performing work on the data such as filtering, transformations, enrichment, or analytics.

Although data processing applications can live in physical servers, they are more common on edge computing devices or in the form of cloud-based Serverless Functions, Container Deployments, or Virtual Machines.

Because of their powerful hardware, Edge devices can typically perform most types of data processing. It is common to see ML models hosted on the Edge device for immediate decision making about how it ought to manage local IoT Devices.

For example, an Edge Device could discard duplicate messages (filtering), attach building information before sending the message to the backend (enrichment), and using an ML model to alert local operators of a device in need of repair (analytics).

Data Processing applications can be hosted as a long-running job inside of virtual machines and servers. This approach is particularly useful when a specific stack not available in other compute platforms is required. For example, if you are required to use legacy applications running on legacy hardware or software, you might be limited to a server or virtual machine.

Container deployments remove much of the operational burden of maintaining a server, and with managed services like Google Cloud Run or AWS Fargate, it is also possible to only run the application when it is needed—such as when a device message is received.

For example, if you were ingesting tens-of-thousands of messages with software requiring disk access, Containers would be an optimal choice. That’s because they are easily scalable and configurable, and they are not tightly-coupled with any hardware platform nor operating system. However, this could have a slight added cost of operational management in the form of cluster configuration and container image management.

Serverless Functions provide the most hands-off experience in infrastructure management, and they are most apt for sporadic data processing. Writing a Serverless Function is as simple as selecting an environment, writing your application, and deploying it to the cloud.

For example, imagine you have two developers assigned to build an application that processes incoming data for 1000 devices every second. Because the team is small, you want to avoid them as much of the infrastructure heavy-lifting as you can. Serverless Functions would achieve this by abstracting away most of the underlying infrastructure, and it would enable the pair to focus primarily on the code dealing with business and data processing logic. Moreover, the billing cost of running such a function would be roughly $0.30/month for processing data from all 1000 devices each second of the year!1

The following diagram showcases an application which uses an AWS Lambda function to perform all the data processing activities discussed in this post: 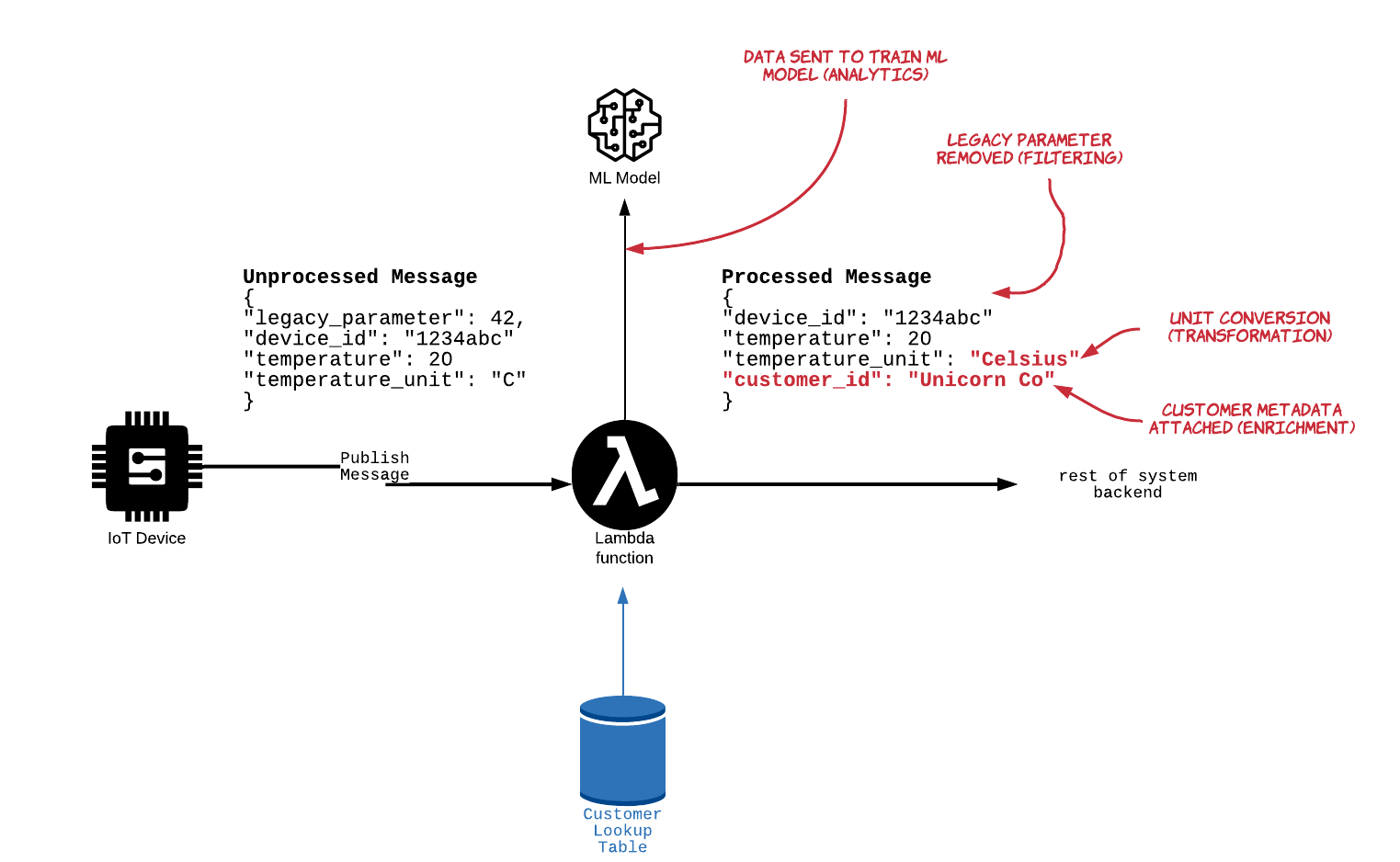 The Data Processing Stage provides the applications used to filter, transform, enrich, and analyze data from IoT devices. These applications can live on the Edge device, or server-side as Virtual Machines, container deployments, or serverless functions.

In the next post, we will explore the Data Storage stage, which consists of the file systems, databases, object stores, and “data lakes” that temporarily or permanently hold data about IoT ecosystems.