This is the second post in the series The Four Stages of IoT: A Data-Centric Taxonomy of the IoT

In my previous post, I discussed the idea of dividing IoT Architectures into four stages: connectivity, processing, storage, and data access. Today we will explore the Connectivity Stage which is the first step in the journey towards value-generation from IoT Device Data. This stage is composed of the mechanisms whose purpose is to facilitate communications to and from IoT devices: these include services, applications, and communication protocols.

We will now see what some of these mechanisms are and how they are leveraged to stream data to and from backend applications. We will accomplish this by breaking the Connectivity Stage down into three main components: the Field IoT Device, the Edge Device, and the Ecosystem Backend.

“IoT devices” are those collecting data about an environment and acting in response to commands and notifications from a Server: a smart thermostat, a weather station, or a current meter can all be examples of IoT devices.

In this instance, we define a “Server” as any entity which consumes IoT Device Data and pushes notifications and commands back to the device: this could be an actual server, edge device, or a cloud provider.

Connectivity at the Field IoT Device

IoT devices can connect to Servers in one of three ways.

Once the IoT Field Device is connected, data can be sent, received, and stored as illustrated in the table below.

The role of Edge devices is to collect data from IoT devices and to relay that data to the ecosystem backend. As mentioned above, these devices can come in the form of Smart Lighting hubs, mobile phones, voice assistants, and more.

Connectivity at the Edge Device

Edge Device Software such as AWS IoT Greengrass, Azure IoT Edge, and EdgeX Foundry provide frameworks to connect to IoT devices, to process their data locally, to respond to events at the edge, and finally, to pass the data on to the backend.

When a Field IoT Device connects to the Edge Device, data can be sent, received, and stored as illustrated in the table below.

Finally we arrive at the Ecosystem Backend where the data is analyzed, processed, stored, and made available in different formats to business intelligence and data analytics applications. The Backend can run on on-premise servers or in cloud platforms such as Amazon Web Services.

IoT and Edge Devices can both communicate with the Backend.

MQTT is a common protocol for communicating to both Field and Edge devices in solutions like AWS IoT and Azure IoT. Furthermore, in these cloud-based solutions, HTTP is available for applications which require a RESTful interface and WebSockets for integration with real-time web applications.

Data Activity for the Ecosystem Backend

When either a Field IoT Device or an Edge Device connect to the Ecosystem backend, data can be sent, received, and stored as illustrated in the table below.

The Connectivity Stage provides the means to load data from IoT devices into the Ecosystem backend where it can be analyzed and turned into actionable insights. We reviewed some mechanisms–including services, applications, and communication protocols–that are used to carry out this extraction throughout the entire Connectivity Stage: the Field IoT Device, the Edge Device, and the Ecosystem Backend.

To finalize, here is a diagram depicting an example IoT Architecture which uses several methods for connectivity to transfer different types of data: 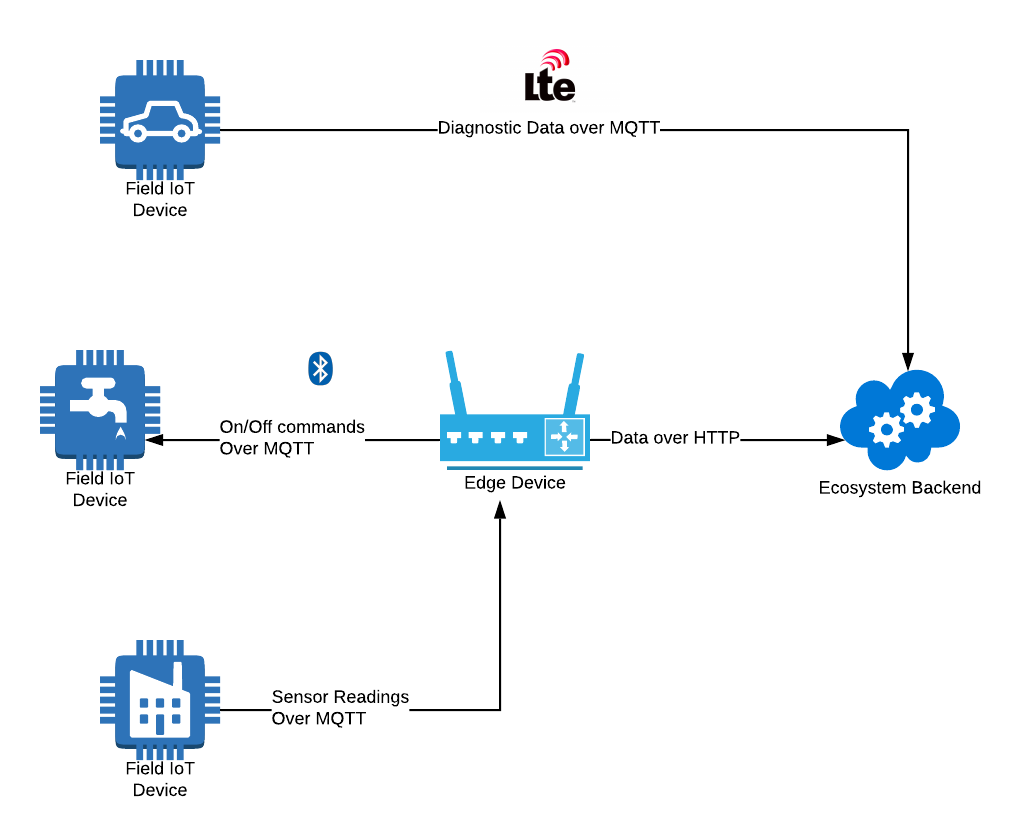 In the next post, I will review the Data Processing Stage, which is where data is enhanced with contextual information and analyzed for patterns over time.